By Jim Hoft & Jennifer Millman (combined and edited by BossInVegas)
Published December 17, 2021 at 8:06pm
New York state has one of the highest vaccination rates in the country. 74% of the eligible public is fully vaccinated in the state. This compares to 56% in Texas and 64% in Florida.
In New York state 81% of the eligible population has received at least one dose of the COVID vaccine.
Despite these numbers, New York state on Friday announced it had reached 21,087 COVID cases – a new daily record.
Market Watch reported:

…New York City officials said they were adding testing sites and doubling capacity at existing locations after long lines formed at some places. Health officials said the COVID-19 positivity rate in the city doubled over a three-day period through Sunday.

New York’s upwelling in cases comes in lockstep with the emergence of the omicron variant, which has appeared to spread easier than previous versions of the virus. In New York City, businesses are asking workers to stay home and classrooms are shutting down as many begin to rethink holiday plans. A top medical adviser to New York City Mayor Bill de Blasio cautioned residents on Thursday that the positive-test rate for Covid-19 had doubled in three days, a pace he said the city hadn’t seen before. The amount of testing can sometimes skew case numbers, however that doesn’t appear to be the case in this instance. There were fewer tests conducted in the data reported Friday than in January 2021 when the previous case record was hit.

The rise in cases is being driven by colder weather and holiday gatherings, and it hits during New York City’s peak season for visitors. Broadway, a top tourist attraction, was forced to close several shows this week, including “Hamilton,” “Tina” and “Mrs. Doubtfire,” after outbreaks among staff. On Friday, the Rockettes canceled four Christmas Spectacular shows at Radio City Music Hall.

The state, like others in the northeast U.S., is dealing with a convergence of the delta and omicron variants. New York reported its first omicron cases on Dec. 2. While delta still makes up the majority of cases, omicron’s share has grown quickly to 13% of the New York region’s cases, according to modeling from the U.S. Centers for Disease Control and Prevention.

The rapid increase in cases has led several area colleges to move final exams online, including Cornell University in upstate New York and New Jersey’s Princeton University.  At Cornell, which had more than 900 cases this week, all 115 of the sequenced cases were omicron, according to information released by the local health department. 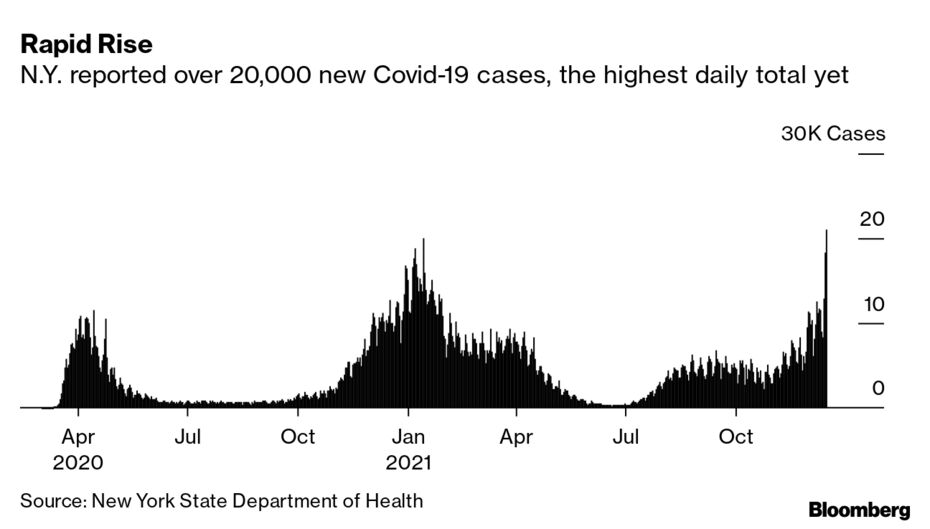 New York Governor Kathy Hochul said omicron cases are “going up exponentially,” in an interview with CNN on Friday. She urged residents to get vaccinated and wear masks, including vaccinated and boosted people due to the spread of breakthrough cases with the omicron variant. Roughly 70% of New Yorkers are fully vaccinated, compared to the U.S. average of 61%.

Hochul said the state’s confirmed omicron cases have jumped from 50 to 250 in a matter of days, but that the number could increase as sequencing lags spread. She said that the state is trying to keep businesses open despite the increase in virus cases and that a “serious decline in the number of cases” would be necessary for the state to re-evaluate the indoor mask mandate it reinstated this week.

The previous record, set 11 months ago on Jan. 14, crumbled when Gov. Kathy Hochul announced 21,027 new positive cases statewide Friday. The old record for most reported cases in a single day was 19,942, when reported hospitalizations were on the brink of 9,000. Now, the number of people admitted is down by more than half.

New York reported close to the same number of tests taken last Friday, but of that batch (over 260,000), there were 10,000 less positive cases one week ago. Also, when you compare hospitalizations to one week ago, the number of people in hospitals for COVID-19 has risen by about 300, reflecting an increase of 8%.

And in New York City, where testing lines have wrapped around blocks and people report wait times well over an hour, 10,286 positive cases were reported Friday. That total is up 20% from the previous day, and 100% from two days earlier. It's also the highest reported testing day for the city since the beginning of the pandemic, and the first time the city saw more than 10,000 cases in a single day.

"The omicron symptoms have been very mild. The impact on those vaccinated has been clinically mild. It's not converting to admissions to the hospital, or deaths," said Dr. Yves Derouseu, Emergency Services Director at Lenox Hill Hospital.

Despite what appear to be milder COVID cases caused by the omicron variant, some of the world's top experts worry the variant is so transimissble, that it may yet still tax our region's hospital system. Colmbia University's Dr. David Ho estimates that the average person infected with the omicron variant to five others — and said that the U.S. need only look across the pond to see what still may be in store.

"The UK surge is bigger than any that they have seen before. Good modeling and data is a week or two behind — that's what we need to prepare for a surge worse than what we've seen before," Dr. Ho said. In an effort to combat both the delta and omicron variants, the state is rushing to acquire millions of at-home tests for New Yorkers living in communities with lower vaccine rates. On CNN Friday, the governor confirmed 1 million cases were already in hand with another 2 million on the way.

The unprecedented omicron-fueled COVID surge enveloping the former epicenter of the pandemic now has the mayor willing to reconsider the end of year festivities. However the mayor decides to handle the event, Hochul said it's a decision best left up to the localities and that de Blasio will "make the right decision."

Asked about the planned end-of-year bash Thursday night on CNN, de Blasio said the party is on for now but that could change at some point if the data warrants it.

"We made the decision a few weeks back when things were much better. But we said vaccinated people only," the Democrat said. "Everyone's been told for weeks and weeks, don't even show up in Times Square unless you're vaccinated."

"Now we're going to reassess constantly with the new information. We're going to follow the data and the science," he added. "Right now, it's on. You know, we'll make a decision as we go, get closer as to what should finally happen."

While that full vaccination requirement is what fueled de Blasio's confidence in a safe, jam-packed Crossroads of the World to close out 2021, a growing number of people who planned to go may be wondering if it is still enough. A day ago, the mayor's top health adviser, Dr. Jay Varma, tweeted, "Um, we've never seen this before in #NYC" regarding COVID positivity rates. The share of people testing positive doubled in three days this week, and Varma said it was an indication of omicron evading immunity in a way no other variant had before.

The city's rolling daily case average is up almost 57% over the rolling averages for the previous four weeks and COVID hospitalizations are up nearly 31%. Delta is the variant believed to be fueling the spike in more severe cases, while omicron is thought to be behind the surge in infections. Both are called "variants of concern."

The latter accounts for only 1% of tested COVID samples in New York City currently, though its prevalence is likely far higher. Delta remains dominant (97%), but experts expect omicron to overtake it as the dominant U.S. strain in a matter of weeks.

The city does not report how many of the new cases are breakthrough infections. They are still believed to be a very small fraction of new COVID cases, and a minute fraction of new hospitalizations, but both of those fractions have been steadily rising since the emergence of omicron in November, state data shows.

The anecdotal evidence is there, too. Breakthrough infections have rattled New York City's entertainment industry resurgence to its core, with the Rockettes becoming the latest casualty Friday — ending their shoes entirely for the 2021 season.

A range of Broadway shows, from "Hamilton," to "Moulin Rouge" to "Mrs. Doubtfire" and others, are canceling performances for the same reason. In some cases, the breakthrough cases in the companies are discovered so late and unexpectedly that audiences are in their seats when they learn the show will not go on.

As the number of COVID cases moves steadily upwards, some restaurants are being forced to close their doors during a peak time for business: right in the middle of the holiday season. But what is almost guaranteed to stay open? The city's schools, as the mayor said he's not even considering closing them down.

But Public Advocate Jumaane Williams, who announced late Thursday night that he has a breakthrough COVID case despite being vaccinated and boosted, disagreed. He believes a return to remote work and even remote school needs to be on the table now.

"What's most frustrating is that we always seem to wait. It doesn't make any sense," said Williams, who said he has only mild symptoms. 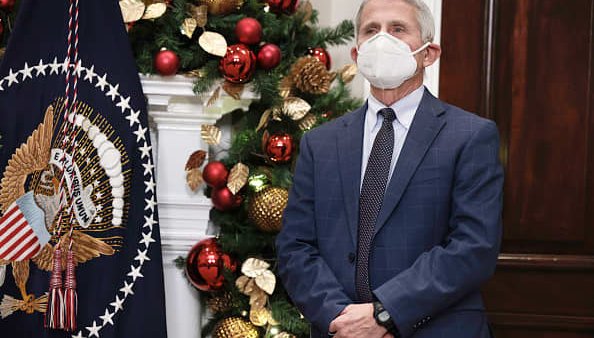 While the first U.S. omicron case was only confirmed 16 days ago, health officials believe it was in America -- and New York, which is detecting it at four times the rate of the rest of the country, the CDC said this week -- well before that.

Still, she and other leading health experts, including Dr. Anthony Fauci, say the vast majority of those cases are mild and the existing vaccines are still overwhelmingly effective at preventing severe COVID-related illness and death. De Blasio agrees.

"If someone's vaccinated, particularly if they have gotten that booster, they're a hell a lot safer," de Blasio said on CNN. "They still might get COVID. I might get COVID. You might get COVID. But we're going to live through it. We probably don't end up in a hospital, which is not only good for you and me, it's good for the whole society."

"COVID has taught us a lesson. It changes all the time. So, the reason you want to be extra careful is because you don't know what the next curve ball's going to be," he added -- and of omicron said, "This is a whole new animal and we got to be honest about the fact that it's moving very fast and we have to move faster."

Dr. Anthony Fauci said Wednesday that new data show booster shots of COVID-19 vaccines offer protection against the omicron variant and there is no current need to reformulate shots for variant-specific boosters.
Dr. Anthony Fauci is also a moron.
(BossInVegas)
Back to blog
.drawer--cart .shopify-cleanslate { display: none; }